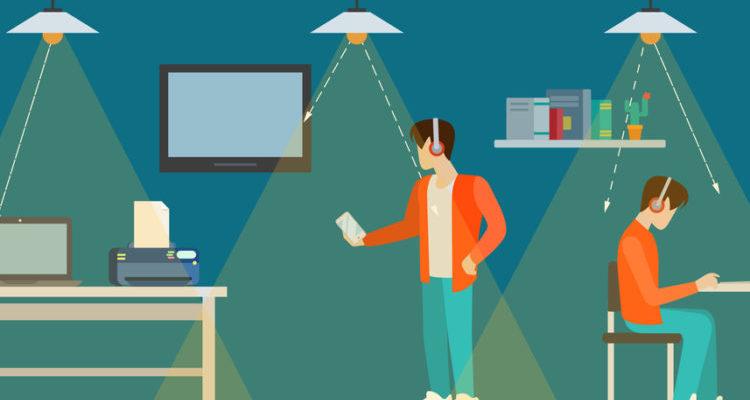 Today, we can’t imagine our world without an internet connection. Let us imagine a world where every light becomes data. Lights that illuminate our surroundings such as offices, homes, transportation services and our streets also providing us data for communication at faster speed for future needs.

Li-Fi is a Visible Light Communication (VLC) based technology. Li-Fi uses a wireless optical networking in which light-emitting diodes (LEDs) aroused for data transmission across different devices. The visible light spectrum is plentiful, unlicensed and free to use. Li-Fi can achieve about 1000 times the data density of Wi-Fi because of its use of Visible light. It requires very less components such as LEDs, Photodiode and Image sensor than radio technology. LED illumination is already optimal, and the data transmission requires negligible additional power.

In simple terms we will not require router in our rooms, simply turn on the lights and the Internet is on.

Although Li-Fi was known from 1990. Li-Fi was first demonstrated in public by German Prof. Harald Haas on Aug 2011 at TED Talk event. 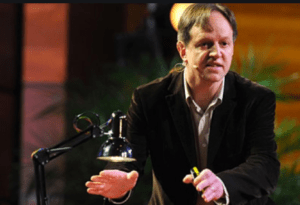 Li-Fi uses visible light communication between 400 and 800 terahertz, data is transmitted by modulating the lights intensity in LED bulb, the signal is received by a photosensitive detector and converted into electronic form. The modulation in the LED bulb takes places so fast that it is not visible to the human eye.

When a constant current is applied to an LED light-bulb, a constant stream of photons is emitted from the bulb which is observed as visible light as a medium to deliver networked, mobile, high-speed communication. If the current is varied slowly, the output intensity of the light dims up and down. This data is then received by a photosensitive detector and then converted back to electrical current. The intensity modulation is imperceptible to the human eye, and thus communication is just as seamless as RF [radio frequency technology]. Using this technique, high speed information can be transmitted from an LED light-bulb. 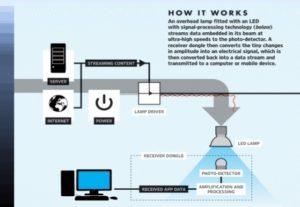 How Li-fi is helping in current Covid-19 situation

Currently, COVID-19 patients are monitored by Li-Fi technology in Hospitals. Nav Wireless, a startup based out of India, provides Li-Fi-based communication system to send patient data such as temperature, ventilator reading using light from LEDs.

It prevents doctor and other medical staff from going to patient room at regular interval for monitoring the readings. It is to believe that it is safer compared to Wi-Fi or LAN because it transmits radio-magnetic waves which may produce interference.

The company has received clearance from Ahmedabad Civil Hospital to cover 1,200 beds that are earmarked exclusively for Covid-19 cases. The device is a plug-n-play LED light with a Li-Fi-enabled chip inside it and a USB dongle that can be connected to a machine.

Li-Fi technology is considered safer and greener compared to the existing modes of Wi-Fi communication, telecom tower-based communication or LAN network. Due to the risk involved with radio-magnetic waves through the existing technologies, they are often not used in critical areas or ICUs. No Wi-Fi or mobile phones are allowed near Covid-19 patients, thereby making remote monitoring of the patients almost impossible.

“We don’t use any radio signal or electro-magnetic waves to transmit the data,” explains Soni. The medical equipment transmits the data and the light receives it, and the reverse is also possible. The entire patient data generated is secure as no one can get inside the network, unlike the risk in a Wi-Fi network.

1.Faster Data Transmission rate, it has speed of Li-Fi is maximum 224 gigabits per second.

2.Li-Fi works on optical band which is not harmful as radio frequency bands.

6.The data communication in Li-Fi is in Line of sight hence it become secure and cannot pass through obstructions such as walls.

As per Global Market Insights Inc. the Li-fi Market is expected to grow by a CAGR of more than 80.8% during the forecast period 2016 – 2022. High Speed for connected devices, Security, indoor based location services and cost effective is key reason for driving the growth of Li-Fi and also, this technology facilitates bidirectional, high speed communication through wireless channel by utilizing visible light spectrum in a closed controlled environment such as hospital, airplane, shopping complex, office, and vehicle among others. It is used to provide communication between electronic devices with the help of visible light communication, or VLC technology. According to another source, “The visible light communication (VLC) market is expected to grow from USD 1.30 billion in 2017 to USD 75.00 billion by 2023, at a CAGR of 96.57% between 2018 and 2023”. There are many other reports that indicate significant growth in the li-fi market.

To summarize, the idea of Li-Fi is right now pulling in a lot of intrigue, not least since it might offer an authentic and productive option in contrast to radio-based wireless systems. With increasing number of individuals and their gadgets to remote web, the wireless transmissions are getting progressively obstructed, making it increasingly harder to get a dependable, fast speed signals. So, seems like Li-Fi has a splendid future.